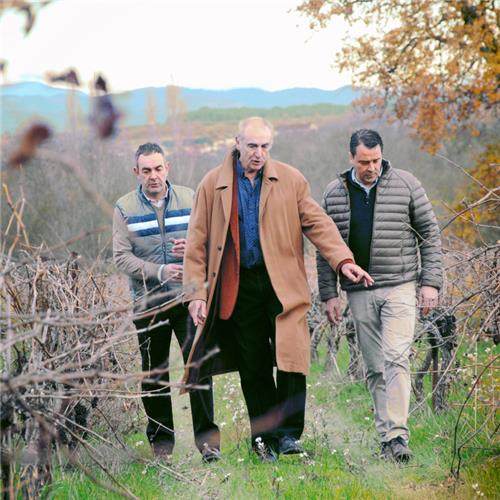 Languedoc Located in the lower foothills of the Cévennes, some twenty miles northwest of Nimes in the eastern Languedoc, Domaine Grand-Chemin has been farmed for over 300 years by the same family. Jean-Marc Floutier and sons Emmanuel and Frédéric have been at the helm of Domaine Grand-Chemin for five generations, with the family owning mixed vineyard holdings around the town of Savignargues. The majority of wines here are made under the Pays d'Oc appellation from fruit grown on clay and limestone soils. The viognier, clocking in at just 12.5%, is made with admirable restraint. The cabernet sauvignon is fermented in inox and aged for six months in concrete and oak. Like the viognier, it is fashioned in a fresher style than many wines from this area. A small quantity of Duché d’Uzès is also made. This relatively new appellation was created in the early 21st century, and full AOC status was granted by INAO as recently as 2012. The wine is a syrah-grenache blend, aged in conrete, in the style of the nearby Rhône Valley, and offers excellent value.

Clear filters
There are no products that can be displayed. If you cannot find what you are looking to purchase and would like to suggest a product that we should stock please fill in the form below. Alternatively, try out our search tips:

• Check your spelling and try again
• Try a similar but different search term, like Mark III instead of Mark 3
• Keep your search term simple as our search facility works best with shorter descriptions

Your product suggestion has been received, thank you. If we decide to stock the item we will be in touch to let you know when it is available.