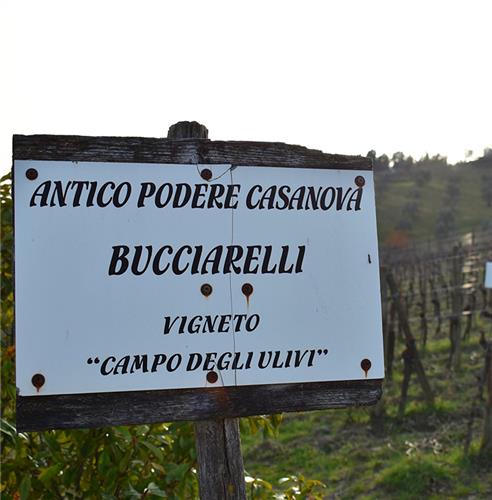 Castellina in Chianti, Tuscany Organic Located in the Chianti Classico region halfway between Florence and Siena, the estate was initially owned by Michelangelo in the 16th century, and stayed in the Buonarotti family until 1863. The Bucciarelli family enter the picture at the start of the 20th century although they were not able to purchase the property outright until 1982, working as sharecroppers until then. Since 1986 they have bottled and sold their own estate production. The Chianti Classico DOCG wines are all 100% sangiovese, cultivated from vines planted mainly on the classic galestro soils of the region, and situated at a relatively high altitude of 400-500m which gives freshness and lift. Fermentation is in concrete, using only wild yeasts, and malolactic occurs naturally. Ageing is in large old Slavonian casks for two years, followed by old barriques for two years and a period in bottle prior to release. As a result, the wines are often several vintages behind their neighbouring Chianti Classico estates, which is no bad thing in our view, giving time for the wines to mature and integrate before release. From their 5 hectares of vines production is modest, with around 15,000 bottles of the Chianti Classico and 5,000 bottles of Riserva produced. The focus is organically cultivated sangiovese for their Chianti Classico, Riserva and IGT Gandino. Hallmark sweet and sour black cherry, notes of leather, Cuban tobacco, cured meat and balsam combine with a mouthfilling intensity framed by ripe, textured tannins. There is also a IGT blend of sangiovese and merlot called Langelo, mainly aged in concrete for a more approachable, easy drinking style.