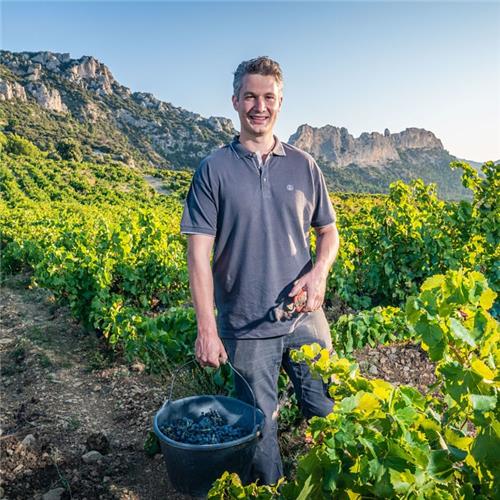 Established in 2009 by Adrien Roustan, who took over the existing domaine of his grandfather, the first vintage was 2010 and the estate is spread across 18 hectares, with the winery itself situated in Vacqueyras AOC, just in front of Mont Ventoux and the Dentelles de Montmirail. The estate takes its name from Adrien's highest parcel of Gigondas at 520 metres in the lieu dit of Le Grand Montmirail, with holdings split between Vacqueyras (10 ha), Gigondas (4.5 ha) and four parcels are located next to the Ouvèze river which go into an IGP Vaucluse called Tire Bouchon. The vineyards are farmed organically and biodynamically and both the Gigondas and Vacqueyras wines are based predominantly on old grenache vines of around 50-70 years of age, while the entry level uses younger fruit. With the wines consistently scored over 90 by Decanter and The Wine Advocate, we think this is undoubtedly a domaine to watch.