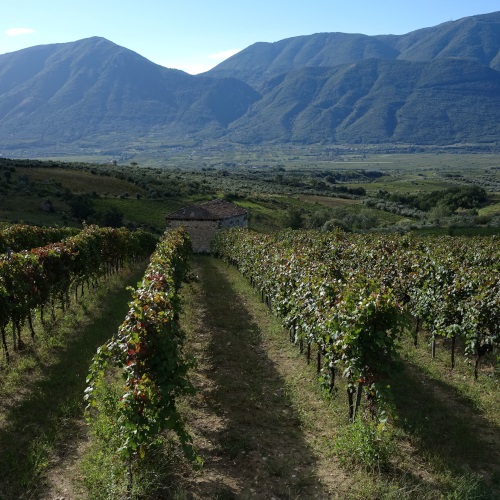 ***scroll down to view all the available wines*** Saint-Verny is the sole co-operative in the Puy-de-Dôme. Originally called Cave des Coteaux it was founded – in 1950 – just outside the village of Veyre-Monton. The winery is now under the control of Desprat, a large, Auvergne based composite wholesaler. A new cellar with 37 temperature controlled, stainless steel tanks replaced the concrete vessels in 1993, and was the first in the region to install a de-stemming machine. The cellar takes in grapes from 53 communes throughout the département, and has 115 adhérents (down from 308 in early 1990s), meaning an average holding of less than two hectares per member, with the largest delivering 10 hectares of grapes. This is also a factor in understanding why half of the crop is still harvested by hand. With 200 hectares of vineyard, the cellar effectively vinifies half of all commercial vineyard plantings in the region. Given that the permitted yields for the appellation are 55hl/ha, the average yield of 45hl/ha sought is particularly modest. Approximately 80% is vinified as Côtes d’Auvergne, with the balance classified as IGP de Puy-de-Dôme. Given all grapes are destemmed, there is no Beaujolais-esque carbonic-maceration style wines to be found here. The rosés are mostly saignée but can also be produced by maceration, but all are designed for drinking within the first two years of the vintage with the volume and quality of the vintage being the determining factor. Nothing here is systematic.

Clear filters
There are no products that can be displayed. If you cannot find what you are looking to purchase and would like to suggest a product that we should stock please fill in the form below. Alternatively, try out our search tips:

• Check your spelling and try again
• Try a similar but different search term, like Mark III instead of Mark 3
• Keep your search term simple as our search facility works best with shorter descriptions

Your product suggestion has been received, thank you. If we decide to stock the item we will be in touch to let you know when it is available.