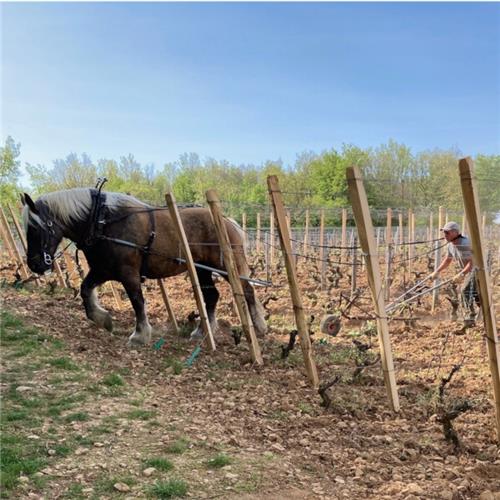 ***Scroll to the bottom to see all available wines*** Originally created by Claude Nonain, an abbot of the town of Fuissé, in the eighteenth century, the estate was confiscated by the state during the Revolution, but not sold. Ownership fell to a schoolteacher from Mâcon who had married into the Nonain family. During a period of famine he enlisted the local people to clear the land to grow cereals, and rewarded their efforts with much needed bread. This kind soul sold the estate in 1848 to a winemerchant from Lyon who subsequently replaced the modest house with the much grander mansion that sits at the centre of the vineyards to this day. A quick succession of new owners followed until it was purchased my Mr. Verambon, and his descendants continue to run it today. In 1995 his great grand-daughter Claire Gazeau, and her Italian husband Fabio Montrasi, came to Fuissé to take the helm and create the wines we know today. Today the Château des Rontets estate includes a Clos, or walled vineyard, of 5.6 hectares in the lieu-dit Les Rontets and a plot of half a hectare in the lieu-dit Pierrefolle, both within the district of Fuissé. The estate also includes half a hectare in the lieu-dit Côte de Besset, within the district of Saint-Amour. Château des Rontets produces three cuvées of Pouilly-Fuissé and one of Saint-Amour. All its wines are certified organic. The Vineyards Here is a perfect example of wines that speak eloquently and directly of place, or terroir. The conversion to organic farming, and the abandoning of all synthetic or systematic treatments, in 2005, was a necessary step to realising the potential of the vineyard. Equally, new vines are propagated from the best plant material in the vineyard, rather than from clones purchased at the nursery, and the dense planting regime focuses quality through smaller yielders of more concentrated fruit. The Rontets vineyard, which surrounds the house, has an ideal elevation and geological structure for wine. At an altitude of 350 m and facing due south, the land has very little top soil, and is based on hard limestone with a high presence of silica. The drainage is excellent and the vines are forced to create deep root sytems that penetrate the hard bedrock. Two wines are produced in this climat, the Clos Vermabon, and the old vine cuvée, Les Birbettes. The Pierrefolle vineyard, which translates as crazy stone perhaps due to ancient Druid ceremonies performed there, is 500m away from the Rontets but has a completely different character. It faces due east and is sheltered from the wind so naturally produces fruit with a sunnier aspect. The bedrock is granite, as in nearby Beaujolais, and the heavier subsoil leads to slower drainage. Both factors lead to wines with an exuberant, more exotic wine, that nevertheless retains the wonderful nerve that distinguishes these wines. Finally, a half a hectare of gamay vines in the Beaujolais cru St Amour, adds a delicious red to complement the three white wines. The soil here is volcanic with a low percentage of sand, which means balanced, late cropping vines and elegant, fine wines. The Wines The same level of detail and thought goes into the vinifications, which take place with natural yeasts, and no adjustments to the fermenting must. Vinifications are long and never rushed, and are carried out in large wooden vats from carefully selected sources. The wines are aged on the fine lees in a mix of smaller oak barrels of up to 10 years of age, so you will not taste the intrusive flavours of wood.