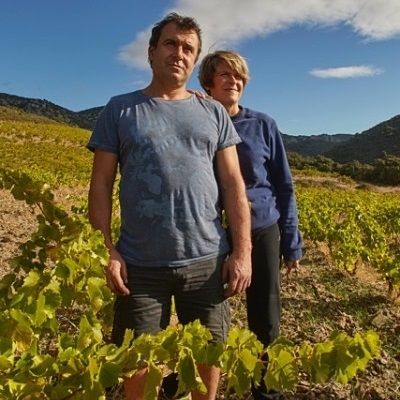 Daniel and Cathy Lafitte took on the management of this estate in 2002 after 15 years of collaboration with the late owner, Jean Pull, whose family had cultivated these vines for over a century. Dominated by the imposing Cathar stronghold, Chateau de Queribus, in the commune of Tautavel, the 17 hectares of Domaine de Soulanes are planted on steep slopes at the eastern end of the long valley of Maury. The 16 parcels which make up the estate's holdings are planted on a mixture of metamorphic schist, sedimentary marl, and chalky clay. Exceptional exposure and constant sunshine is moderated by the benign influence of the north-westerly wind, the Tramontane. Old bush vines, farmed organically since Jean Pull's time, cling to the arid slopes surrounded by the scrub herbs that give sweetness to the warm evening air in this rugged, windswept landscape in the hills behind the pretty fishing village of Collioure.    The whites have a unique personality: intense, full-bodied, textured, and arresting with a tension between muscular structure, and lingering notions of quince and greengage and a saline sting in the tail. The reds are also full-bodied, but have a drier, more baked, garrigue-scented character than the reds of the southern Rhone and nod more naturally towards Priorat with ripe tannins and heady perfume. The sweet wines are all their own and range from charming fruity Vins Doux Naturels to long-aged amber coloured wines in the mould of tawny port that offer stunning value and huge complexity. The former play wonderfully against fresh fruit, especially melon and strawberries, while the latter are perfect with chocolate or simply for meditation over cheese.